Percy Carruthers Band fonds RG 562
JavaScript is disabled for your browser. Some features of this site may not work without it. 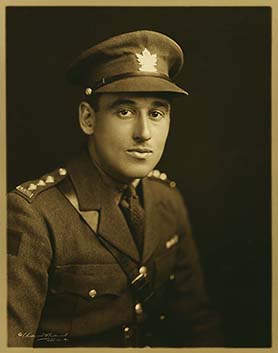 Percy Carruthers Band was born on 27 November 1892 in Toronto, Ontario to Charles Walter Band, a grain merchant and Jessie Camp Shaw Band. He graduated from Upper Canada College and became a broker. He worked at the Dominion Bank and then at Maple Leaf Milling Company. He was stationed at Port Colborne for a while. Before leaving for the front, he was with Bankers Bond Company of Toronto and is also listed as working with the firm of Bailey, Wood and Cross. Lieutenant Band received a Certificate of Military Qualifications on Dec. 24th, 1914. He received his Certificate of Military Instruction on Nov. 30, 1915. He received these certificates while with the 48th Regiment (Highlanders). He enlisted in 1914 and went overseas in August of 1915 as an officer in the 35th Battalion. By August 26, 1915, he is listed as being with the 23rd Reserve Battalion. A year later, in August of 1916 Lieutenant Band arrived in France and was posted to the 2nd Battalion – “The Second Iron”. In 1916, Band was the victim of shell shock received during a charge. He was wounded in April 1917 at Vimy Ridge yet he remained on duty. At this time he received a gunshot wound to his right jaw. He earned a promotion to Captain 0n September 16th, 1917. He was wounded again in November 1917 at Passchendaele where he suffered a gunshot wound to the ear. For his courage and determination Percy Band received the Military Cross on February 18, 1918. He led his company under difficult circumstances even though he was wounded. He was awarded a bar to the Military Cross for gallantry during a successful attack on two villages on December 2nd, 1918. During this attack he led his company against enemy machine guns. It is said that he displayed exceptional leadership qualities and skill during this time. On August 30 in 1918, he made a daring reconnaissance to the front under heavy fire in an attack on Upton Wood. He was also commended on his gallantry during attacks on Cagnicourt and the Canal du Nord in September 1918. He was awarded the second bar to the Military Cross on February 1, 1919. The award of the Croix de Guerre was conferred on Captain Percy Carruthers Band by the President of the French Republic on December 15th, 1918 for distinguished service rendered during the course of the campaign. His general demobilization took place on April 25, 1919. Percy Band married Margaret Julia Woodruff on November 25, 1919, and they had three children: Charles Woodruff Band (1921), Margaret Elizabeth Band (1924) and Robert DeVeaux Woodruff Band (1927). After the war, Mr. Band was a manager at Geo. Weston Bread and Cakes Limited, St. Catharines. Percy Band was also an avid collector. His collections included antique toys and art. He died suddenly on May 19, 1961. The Toronto Telegram published this about him: “Captain Percy Carruthers Band, M.C. with two Bars, Croix de Guerre with Palm – was an officer whose buoyant spirit and gallantry mirrored the vibrant soul of the Battalion. Blythe of heart, yet endowed with a fine sense of responsibility, he gave inspired leadership of No. 3 Company.” Click here to view the Percy Carruthers Band fonds finding aid: https://dr.library.brocku.ca/bitstream/handle/10464/9124/Percy%20Carruthers%20Band%20fonds%20RG%20562.pdf?

Current copyright applies. In some instances, researchers must obtain the written permission of the holder(s) of copyright and the Brock University Archives before publishing quotations from materials in the collection. Most papers may be copied in accordance with the Library’s usual procedure unless otherwise specified.