Donald Ziraldo Fonds RG 457
JavaScript is disabled for your browser. Some features of this site may not work without it. 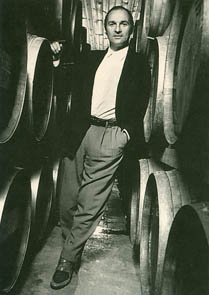 In 1974, Ziraldo was running Ziraldo Nurseries when he met Austrian born schoolteacher, chemist and winemaker Karl J. Kaiser. They realized that there was a gap in the premium varietal wine market and decided to plant a premium traditional European variety of grape vine species, the Vitis vinifera. This was an innovation in the Niagara region because the current wine producers were not using premium European grapes at the time. Ziraldo and Kaiser founded and then formally incorporated Inniskillin Wines Inc. in Niagara-on-the-Lake, Ontario on July 31, 1975. Ziraldo successfully lobbied General George Kitching, CEO of the LCBO, for a winery license. In 1975, Kitching granted him a winery license, the first in Ontario since Prohibition ended. A major turning point for Inniskillin came in 1984 when Karl Kaiser successfully harvested the first Icewine crop from frozen grapes on the vine and bottled Eiswein Vidal (Icewine). In 1990, Inniskillin received worldwide recognition for this Icewine when their 1989 Vidal Icewine won the most prestigious award in the wine world, the Grand Prix d’Honneur, given at Vinexpo in France. This victory has been called ‘the award heard round the world’ and it launched Inniskillin into the international wine arena. At the same time, this helped lift the profile of Canadian wines in general. Inniskillin not only became Canada’s leading producer of Icewine, but it also became known for producing ‘one of the world’s great wines’. After the 1990 award, Ziraldo began a major public relations campaign to promote Inniskillin and build Icewine into a worldwide brand. He travelled broadly every year to promote the brand and products and networked extensively with politicians, celebrities, chefs, sommeliers, etc. To ensure worldwide and long-term success, Ziraldo introduced Icewine to Asia and the United States which were new markets. In 1992, Inniskillin merged with Cartier Wines, and in 1993 Cartier Inniskillin Vintners Inc. merged with T.G. Bright & Co. Limited, forming the new company Vincor International Inc. Inniskillin wines was now a subsidiary of Vincor. Ziraldo became a Director at Vincor International Inc. from 1993 to 2004. From 1989 to the mid 1990s, Ziraldo also became President of Inniskillin Napa, in Napa Valley, California. Inniskillin purchased Napa Valley vineyards and produced wines under the Terra label. In 1994, Ziraldo set up a subsidiary estate winery of Inniskillin in Oliver, British Columbia which was called Inniskillin Okanagan Vineyards Inc. He became President of the winery. This started as a partnership between Inniskillin and the local Inkameep Indian Band in the Okanagan. In 2006, Ziraldo left Inniskillin and since that time he has been involved in other Icewine related ventures such as running Ziraldo Estate Winery and producing Ziraldo Riesling Icewine 2007. He also is in partnership with the Niagara based Equifera Estate Winery to produce Equifera Icewine. His most recent projects include planting Picolit grapes in his parent’s hometown, in a project called Picolit Di Fagagna and becoming Managing Director of the Senhora Do Convento Port Winery in Portugal. Donald Ziraldo was instrumental in the creation of the Vintners Quality Alliance (VQA) in Ontario and was its founding Chair from 1988-1995. The VQA was established as a regulatory and appellation system which secured the quality and origin of Canadian wines made under this system. The VQA designation and bottle label gave the consumer confidence that the wines they were purchasing were 100% local products. The VQA system was set up first in Ontario and then in British Columbia.