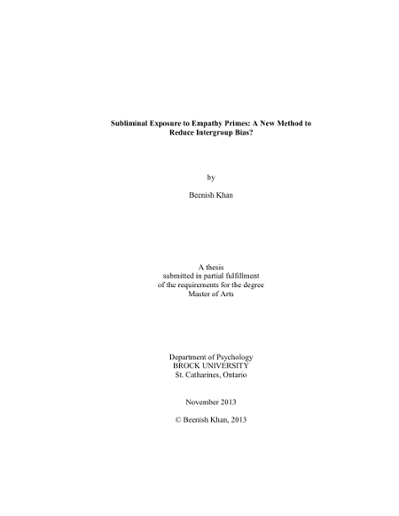 An abundant literature has demonstrated the benefits of empathy for intergroup relations (e.g., Batson, Chang, Orr, & Rowland, 2002). In addition, empathy has been identified as the mechanism by which various successful prejudice-reduction procedures impact attitudes and behaviour (e.g., Costello & Hodson, 2010). However, standard explicit techniques used in empathy-prejudice research have a number of potential limitations (e.g., resistance; McGregor, 1993). The present project explored an alternative technique, subliminally priming (i.e., outside of awareness) empathy-relevant terms (Study 1), or empathy itself (Study 2). Study 1 compared the effects of exposure to subliminal empathy-relevant primes (e.g., compassion) versus no priming and priming the opposite of empathy (e.g., indifference) on prejudice (i.e., negative attitudes), discrimination (i.e., resource allocation), and helping behaviour (i.e., willingness to empower, directly assist, or expect group change) towards immigrants. Relative to priming the opposite of empathy, participants exposed to primes of empathy-relevant constructs expressed less prejudice and were more willingness to empower immigrants. In addition, the effects were not moderated by individual differences in prejudice-relevant variables (i.e., Disgust Sensitivity, Intergroup Disgust-Sensitivity, Intergroup Anxiety, Social Dominance Orientation, Right-wing Authoritarianism). Study 2 considered a different target category (i.e., Blacks) and attempted to strengthen the effects found by comparing the impact of subliminal empathy primes (relative to no prime or subliminal primes of empathy paired with Blacks) on explicit prejudice towards marginalized groups and Blacks, willingness to help marginalized groups and Blacks, as well as implicit prejudice towards Blacks. In addition, Study 2 considered potential mechanisms for the predicted effects; specifically, general empathy, affective empathy towards Blacks, cognitive empathy towards Blacks, positive mood, and negative mood. Unfortunately, using subliminal empathy primes “backfired”, such that exposure to subliminal empathy primes (relative to no prime) heightened prejudice towards marginalized groups and Blacks, and led to stronger expectations that marginalized groups and Blacks improve their own situation. However, exposure to subliminal primes pairing empathy with Blacks (relative to subliminal empathy primes alone) resulted in less prejudice towards marginalized groups and more willingness to directly assist Blacks, as expected. Interestingly, exposure to subliminal primes of empathy paired with Blacks (vs. empathy alone) resulted in more pro-White bias on the implicit prejudice measure. Study 2 did not find that the potential mediators measured explained the effects found. Overall, the results of the present project do not provide strong support for the use of subliminal empathy primes for improving intergroup relations. In fact, the results of Study 2 suggest that the use of subliminal empathy primes may even backfire. The implications for intergroup research on empathy and priming procedures generally are discussed.