Aspects of spatial and habitat ecology of multiple Anopheles species (Diptera: Culicidae): malaria vectors in the highlands and foothills of Ecuador 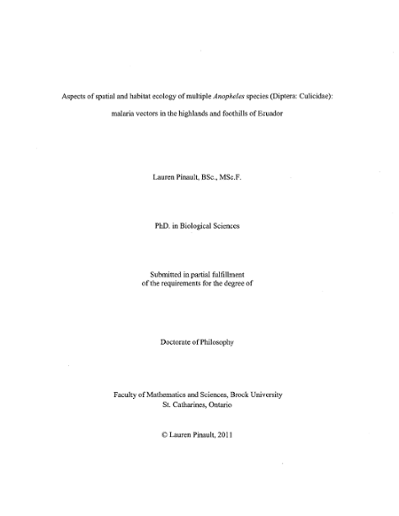 The resurgence of malaria in highland regions of Africa, Oceania and recently in South America underlines the importance of the study of the ecology of highland mosquito vectors of malaria. Since the incidence of malaria is limited by the distribution of its vectors, the purpose of this PhD thesis was to examine aspects of the ecology of Anopheles mosquitoes in the Andes of Ecuador, South America. A historical literature and archival data review (Chapter 2) indicated that Anopheles pseudopunctipennis transmitted malaria in highland valleys of Ecuador prior to 1950, although it was eliminated through habitat removal and the use of chemical insecticides. Other anopheline species were previously limited to low-altitude regions, except in a few unconfirmed cases. A thorough larval collection effort (n=438 attempted collection sites) in all road-accessible parts of Ecuador except for the lowland Amazon basin was undertaken between 2008 - 2010 (Chapter 3). Larvae were identified morphologically and using molecular techniques (mitochondrial COl gene), and distribution maps indicated that all five species collected (Anopheles albimanus, An. pseudopunctipennis, Anopheles punctimacula, Anopheles oswaldoi s.l. and Anopheles eiseni) were more widespread throughout highland regions than previously recorded during the 1940s, with higher maximum altitudes for all except An. pseudopunctipennis (1541 m, 1930 m, 1906 m, 1233 m and 1873 m, respectively). During larval collections, to characterize species-specific larval habitat, a variety of abiotic and biotic habitat parameters were measured and compared between species-present and species-absent sites using chi-square tests and stepwise binary logistic regression analyses (Chapter 4). An. albimanus was significantly associated with permanent pools with sand substrates and An. pseudopunctipennis with gravel and boulder substrates. Both species were significantly associated with floating cyanobacterial mats and warmer temperatures, which may limit their presence in cooler highland regions. Anopheles punctimacula was collected more often than expected from algae-free, shaded pools with higher-than-average calculated dissolved oxygen. Anopheles oswaldoi s.l., the species occurring on the Amazonian side of the Andes, was associated with permanent, anthropogenic habitats such as roadside ditches and ponds. To address the hypothesis that human land use change is responsible for the emergence of multiple highland Anopheles species by creating larval habitat, common land uses in the western Andes were surveyed for standing water and potential larval habitat suitability (Chapter 5). Rivers and road edges provided large amounts of potentially suitable anopheline habitat in the western Andes, while cattle pasture also created potentially suitable habitat in irrigation canals and watering ponds. Other common land uses surveyed (banana farms, sugarcane plantations, mixed tree plantations, and empty lots) were usually established on steep slopes and had very little standing water present. Using distribution and larval habitat data, a GIS-based larval habitat distribution model for the common western species was constructed in ArcGIS v.l 0 (ESRI 2010) using derived data layers from field measurements and other sources (Chapter 6). The additive model predicted 76.4 - 97.9% of the field-observed collection localities of An. albimanus, An. pseudopunctipennis and An. punctimacula, although it could not accurately distinguish between species-absent and speciespresent sites due to its coarse scale. The model predicted distributional expansion and/or shift of one or more anopheline species into the following highland valleys with climate warming: Mira/Chota, Imbabura province, Tumbaco, Pichincha province, Pallatanga and Sibambe, Chimborazo province, and Yungilla, Azuay province. These valleys may serve as targeted sites of future monitoring to prevent highland epidemics of malaria. The human perceptions of malaria and mosquitoes in relation to land management practices were assessed through an interview-based survey (n=262) in both highlands and lowlands, of male and female land owners and managers of five property types (Chapter 7). Although respondents had a strong understanding of where the disease occurs in their own country and of the basic relationship among standing water, mosquitoes and malaria, about half of respondents in potential risk areas denied the current possibility of malaria infection on their own property. As well, about half of respondents with potential anopheline larval habitat did not report its presence, likely due to a highly specific definition of suitable mosquito habitat. Most respondents who are considered at risk of malaria currently use at least one type of mosquito bite prevention, most commonly bed nets. In conclusion, this interdisciplinary thesis examines the occurrence of Anopheles species in the lowland transition area and highlands in Ecuador, from a historic, geographic, ecological and sociological perspective.