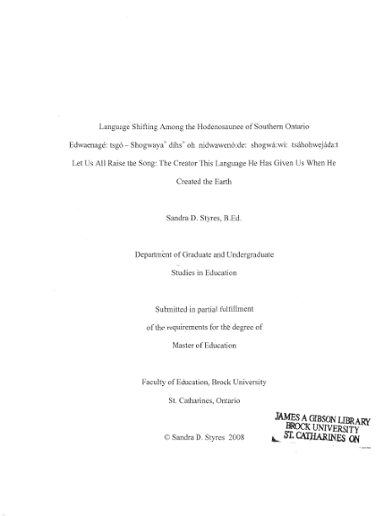 Through aggressive legislative and educational policies Indigenous languages globally have been shifted to the language of the dominant society. Globalization has brought previously geo-politically and/or geo-linguistically isolated people and language . groups into close proximity that necessitated interaction and at times intense power struggles. There are currently approximately 6,000 spoken languages in the world, more than half are either endangered, dying or disappearing altogether. Canadian statistics reveal an overall 3 % decline in the intergenerational transmission of language. Of the original 60 Indigenous languages spoken in Canada, 8 are extinct, 13 are nearly extinct, and 23 are critical. The remaining languages have a slim chance of survival. Within the next 100 years only 4 Indigenous languages will remain. The Hodenosaunee languages of Southern Ontario are not incl~ded among the list of languages that will survive the next 100 years. There are, without a doubt, complex challenges in the maintenance of Indigenous languages within a dominant-culture influenced environment. Given the increasing awareness of the social impact of linguistic integrity and preservation of languages on Indigenous people as a whole, this study considers how language is currently being used; the social, economic, and political implications of language shifting; the need to shift our social consciousness in order to understand the urgency in privileging our Hodenosaunee languages; as well as ways in which we might achieve those goals as individuals, as families, and as a community.