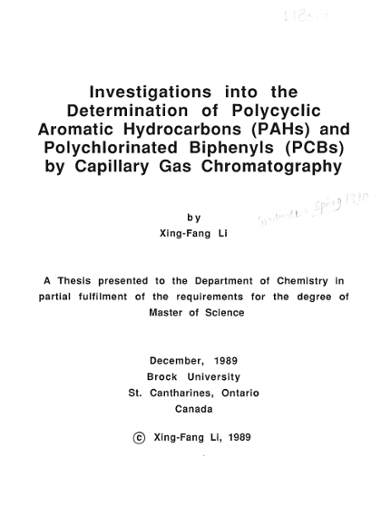 Factors involved in the determination of PAHs (16 priority PAHs as an example) and PCBs (10 PCB congeners, representing 10 isomeric groups) by capillary gas chromatography coupled with mass spectrometry (GC/MS, for PAHs) and electron capture detection (GC/ECD , for PCBs) were studied, with emphasis on the effect of solvent. Having various volatilities and different polarities, solvent studied included dichloromethane, acetonitrile, hexan e, cyclohexane, isooctane, octane, nonane, dodecane, benzene, toluene, p-xylene, o-xylene, and mesitylene. Temperatures of the capillary column, the injection port, the GC/MS interface, the flow rates of carrier gas and make-up gas, and the injection volume were optimized by one factor at a time method or simplex optimization method. Under the optimized conditions, both peak height and peak area of 16 PAHs, especially the late-eluting PAHs, were significantly enhanced (1 to 500 times) by using relatively higher boiling point solvents such as p-xylene and nonane, compared with commonly used solvents like benzene and isooctane. With the improved sensitivity, detection limits of between 4.4 pg for naphthalene and 30.8 pg for benzo[g,h,i]perylene were obtained when p-xylene was used as an injection solvent. Effect of solvent on peak shape and peak intensity were found to be greatly dependent on temperature parameters, especially the initial temperature of the capillary column. The relationship between initial temperature and shape of peaks from 16 PAHs and 10 PCBs were studied and compared when toluene, p-xylene, isooctane, and nonane were used as injection solvents. If a too low initial temperature was used, fronting or split of peaks was observed. On the other hand, peak tailing occurred at a too high initial column temperature. The optimum initial temperature, at which both peak fronting and tailing were avoided and symmetrical peaks were obtained, depended on both solvents and the stationary phase of the column used. On a methyl silicone column, the alkane solvents provided wider optimum ranges of initial temperature than aromatic solvents did, for achieving well-shaped symmetrical GC peaks. On a 5% diphenyl: 1% vinyl: 94% dimethyl polysiloxane column, when the aromatic solvents were used, the optimum initial temperature ranges for solutes to form symmetrical peaks were improved to a similar degree as those when the alkanes were used as injection solvents. A mechanism, based on the properties of and possible interactions among the analyte, the injection solvent, and the stationary phase of the capillary column, was proposed to explain these observations. The effect of initial temperature on peak height and peak area of the 16 PAHs and the 10 PCBs was also studied. The optimum initial temperature was found to be dependent on the physical properties of the solvent used and the amount of the solvent injected. Generally, from the boiling point of the solvent to 10 0C above its boiling point was an optimum range of initial temperature at which cthe highest peak height and peak area were obtained.