Weight-preoccupation, personality and depression in university students : an interactionist perspective 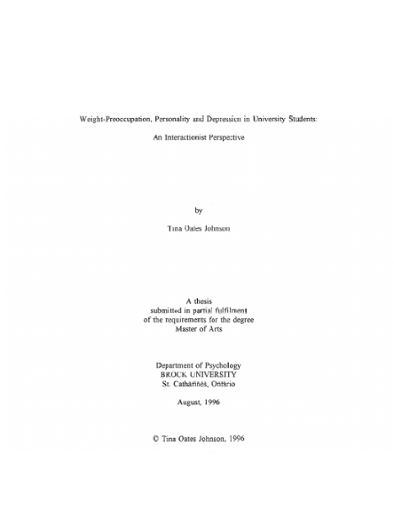 The present research was designed to examine Beck's (1983; 1987) cognitive diathesis-stress model of depression in a new context. Specifically, this cross-sectional study investigated whether Beck's cognitive-personality traits of sociotropy and autonomy interacted with a specific daily hassle/stressor, weightpreoccupation, in the prediction of depressed mood in women and men. Weightpreoccupation was chosen as the particular daily stressor, because, according to Kanner, Coyne, Schaeffer, and Lazarus (1981). concern about weight and physical appearance were two of the most troublesome daily hassles among university students. ContraIy to current stereotypes, men also express concerns with weight and appearance (Cash, Winstead, &, landi, 1986), in both the direction of weight loss and weight/muscle gain (Drewnowski &, Yee, 1987). Thus, unique to this study was the examination of weight-preoccupation in men, not only in the direction of weight loss, but also in the direction of weight and muscle gain. Two hundred and fifty-one undergraduates were administered the revised SociotropyAutonomy Scale (SAS), the Beck Depression Inventory (BDij, the Hassles and Uplifts Scale, the Eating Disorders Inventory (EDI), and the Restraint Scale (RS). Through a process of model building, a final model was devised in which depression (ie., BDI total scores) was regressed on personality (Le., SAS Sociotropy) and weight-preoccupation (i.e., Drive for Thinness, Body Dissatisfaction, and the Restraint Scale). Separate hierarchical multiple regression analyses, with BDI as the dependent variable, were carried out for each of the 2 3 weight-preoccupation variables. Results revealed a specific congruent interaction between weight,..preoccupation and personality. Specifically, drive for thinness and body dissatisfaction interacted with sociotropy to predict depressed mood in both women and men, but the interaction between sociotropy and the Restraint Scale was marginal. Findings suggested that weight-preoccupied women and men experienced depressed mood to the extent that they were characterized as more highly sociotropic. As predicted, personality (i.e., sociotropy), moderated the relationship between daily stress (i.e., weight-preoccupation) and depression. Thus, results revealed that the proposed diathesis-stress model seemed to operate in the same manner for women and men. Moreover, the examination of weightpreoccupation among men (i.e., in the direction of both weight loss and weight/muscle gain) further revealed that, when curvilinearity was taken into account, highly sociotropic men, who had a low desire to gain weight and muscle mass (i.e., most likely those who desired to lose weight), experienced higher levels of depressed mood than those who had a "medium" desire for weight and muscle gain. However, the highest levels of depressed mood was experienced by highly sociotropic men who were highly weight-preoccupied in the direction of wanting to gain weight and muscle mass. In addition, possible reasons for the present fmdings, as wen as iimitations and impiicalions for future research are discussed.