Thermoaclimatory variations in the microenvironment of hemoglobin in the rainbow trout, Salmo gairdneri and the carp, Cyprinus carpio 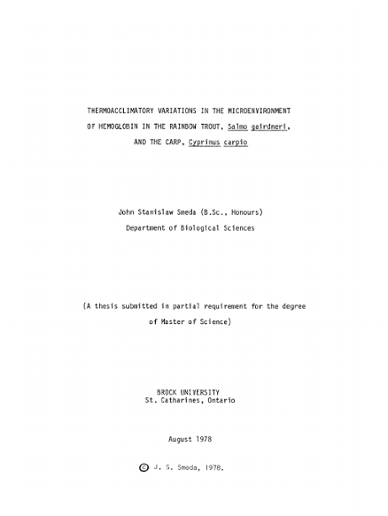 Several inorganic substances (e.g., C£ , Mg , Ca , H ) are potent negative modulators of hemoglobin-oxygen affinity. To evaluate the possibility that potentially adaptive changes in the red cell ionic environment of hemoglobin may take place during acclimation of fishes to increased environmental temperature, hematological status (hemoglobin, hematocrit, red cell numbers, mean erythrocytic volume and hemoglobin content), plasma + + 2+ 2+ and packed red cell electrolyte levels (Na , K , Ca , Mg , C£ ) were evaluated in summer and winter populations of the stenothermal rainbow trout, Salmo gairdneri, following acclimation to 2°, 10°, 18°C, and in a spring population of eurythermal carp, Cyprinus carpio, held at 2°, 16° and 30°C. From these data cell ion concentrations and ion:hemoglobin ratios were estimated. In view of the role of red cell carbonic anhydrase in the reductions of blood C02 tensions and the recruitment of Na and C£~ lost by fishes, a preliminary investigation of thermoacclimatory changes in the activity of this system in rainbow trout erythrocytes was conducted. Few changes in hematological status were encountered following acclimation. There was, however, some evidence of weight-specific differential hematological response in carp. This lead to markedly greater increases in hemoglobin, hematocrit and red cell numbers in smaller rather than in larger specimens at higher temperatures; variations which were 2+ well correlated with changes in plasma Ca . Plasma composition in summer trout was not altered by acclimation. In winter trout plasma Na and K increased at higher temperatures. Carp were characterized by increases in plasma calcium, and reductions in sodium and magnesium under these conditions. Several significant seasonal differences in plasma ion levels were observed in the trout. (n) In trout, only erythrocytic K and K :Hb were altered by acclimation, rising at higher temperatures. In carp Na , Na :Hb, C£~ and C£~:Hb in- 2+ 2+ creased with temperature, while Mg and Mg :Hb declined. Changes in overall ionic composition in carp red cells were consistent with increases in H content. In both species significant reciprocal variations in C£~ 2+ - + and Mg were found. In mammalian systems increases in C£ and H reduce hemoglobin-oxygen affinity by interaction with hemoglobin. Reduction in 2+ 2+ Mg maximizes organophosphate modulator availability by decreasing ATP»Mg complex formation. Thus, the changes observed may be of adaptive value in reducing hemoglobin-oxygen affinity, and facilitating oxygen release to cells at higher temperatures. Trout appear to maintain a high chloridelow magnesium state over the entire thermal tolerance zone. Carp, however, achieved this state only at higher temperatures. In both species mean erythrocytic volume was decreased at higher temperatures and this may facilitate branchial oxygen loading. Since mean erythrocytic volume was inversely related to red cell ion content, it is hypothesized that reductions in cell volume are achieved by export of some unidentified solute or solutes. Variations in the carbonic anhydrase activity that could be attributed to the thermoacclimatory process were quite modest. On the other hand, assays performed at the temperature of acclimation showed a large temperature effect where under in vivo conditions of temperature fish acclimated to higher temperatures might be expected to have higher activities. Furthermore, since hematocrit increased with temperature in these fish, while carbonic anhydrase is present only in the erythrocyte, the whole blood levels of this enzyme are expected to increase and further augment the temperature effect. This, in turn, could aid in the reduction of C02 (111) tension and increase the production of H and HC0~~ used in the active uptake of Na and C£ at higher temperatures.