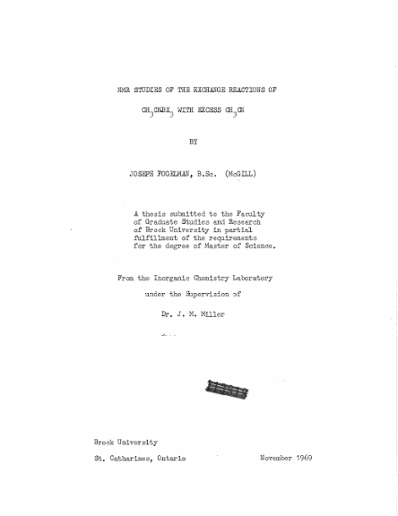 Exchange reactions between molecular complexes and excess acid or base are well known and have been extensively surveyed in the literature(l). Since the exchange mechanism will, in some way involve the breaking of the labile donor-acceptor bond, it follows that a discussion of the factors relating to bonding in molecular complexes will be relevant. In general, a strong Lewis base and a strong Lewis acid form a stable adduct provided that certain stereochemical requirements are met. A strong Lewis base has the following characteristics (1),(2) (i) high electron density at the donor site. (ii) a non-bonded electron pair which has a low ionization potential (iii) electron donating substituents at the donor atom site. (iv) facile approach of the site of the Lewis base to the acceptor site as dictated by the steric hindrance of the substituents. Examples of typical Lewis bases are ethers, nitriles, ketones, alcohols, amines and phosphines. For a strong Lewis acid, the following properties are important:( i) low electron density at the acceptor site. (ii) electron withdrawing substituents. (iii) substituents which do not interfere with the close approach of the Lewis base. (iv) availability of a vacant orbital capable of accepting the lone electron pair of the donor atom. Examples of Lewis acids are the group III and IV halides such (M=B, AI, Ga, In) and MX4 - (M=Si, Ge, Sn, Pb). The relative bond strengths of molecular complexes have been investigated by:- (i) (ii) (iii) (iv) (v] (vi) dipole moment measurements (3). shifts of the carbonyl peaks in the IIIR. (4) ,(5), (6) .. NMR chemical shift data (4),(7),(8),(9). D.V. and visible spectrophotometric shifts (10),(11). equilibrium constant data (12), (13). heats of dissociation and heats of reactions (l~), (16), (17), (18), (19). Many experiments have bben carried out on boron trihalides in order to determine their relative acid strengths. Using pyridine, nitrobenzene, acetonitrile and trimethylamine as reference Lewis bases, it was found that the acid strength varied in order:RBx3 > BC1 3 >BF 3 • For the acetonitrile-boron trihalide and trimethylamine boron trihalide complexes in nitrobenzene, an-NMR study (7) showed that the shift to lower field was. greatest for the BB~3 adduct ~n~ smallest for the BF 3 which is in agreement with the acid strengths. If electronegativities of the substituents were the only important effect, and since c~ Br ,one would expect the electron density at the boron nucleus to vary as BF3<BC1~ BBr 3 and therefore, the acid strength would vary as BF~BC1)BBr3: However, for the boron trihalides, the trend is in the opposite direction as determined experimentally. Considerable back-bonding (20), (21) between the halogen and the boron atoms has been proposed as the predominating factor, i.e. ~rt- back-bond between a lone electron pair on the halogen and the vacant orbital on the boron site. The degree of back-bonding varies inversely as the bo~on halogen distance and one would therefore expect the B-F bond to exhibit greater back-bonding character than the B-Cl or B-Br bonds. Since back-bonding transfers electron density from substituent to the boron atom site, this process would be expected to weaken the Lewis acid strength. This explains the Lewis acid strength increasing in the order BF 3 BC1 3 BBr 3 . When the acetonitrile boron trihalide complex is formed, the boron atom undergoes ~_cbange of hybridization from sp2 to sp3. From a linear relationship between the heat of formation of ethyl acetate adducts and the shift in the carbonyl I.R. stretch, Drago (22) et al have proposed that the angular di~tortion of the X-B-X bonds from sp2 (12 ) to sp3 (10 hybridization is proportional to the amount of charge transferred, i.e. to the nature of the base, and they have rejected the earlier concept of reorganization energy in explaining the formation of the adduct bond (19).