Investigations into the determinations of hydride-forming elements 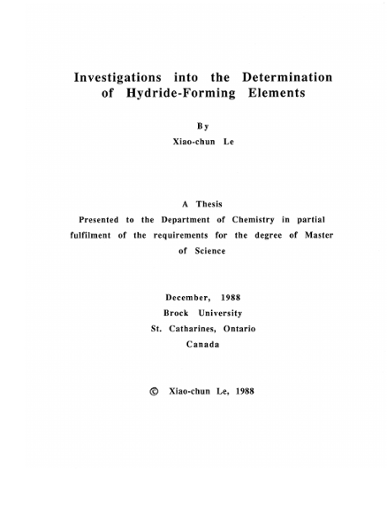 Analytical methods for the determination of trace amounts of germanium, tin and arsenic were established using hydride generation coupled with direct current plasma atomic emission spectrometry. A continuous gas flowing batch system for the hydride generation was investigated and was applied to the determination of germanium(Ge), tin(Sn), antimony(Sb) and lead(Pb) (Preliminary results suggest that it is also applicable to arsenic)As) ). With this system, the reproducibility of signals was improved and the determination was speeded up, compared with the conventional batch type hydride generation system. Each determination was complete within one minute. Interferences from a number of transition metal ions, especially from Pd(II), Pt(IV), Ni(II), Cu(II), Co(II), and Fe(II, III), have proven to be very serious under normal conditions, in the determination of germanium, tin, and arsenic. These interference effects were eliminated or significantly reduced in the presence of L-cystine or L-cysteine. Thus, a 10-1000 fold excess of Ni(II), Cu(II), Co(II), Fe(II), Pt(IV), Pd(II), etc. can be tolerated without interference, In the presence of L-cystine or L-cysteine, compared with absence of interference reducing agent. The methods for the determination of Ge, Sn, and As were examined by the analyses of standard reference materials. Interference effects from the sample matrix, for example, in transition metal-rich samples, copper, iron and steel, were eliminated by L-cystine (for As and Sn) and by LI cysteine (for Ge). The analysis of a number of standard reference materials gave excellent results of As and Sn contents in agreement with the certified values, showing there was no systematic interference. The detection limits for both germanium and tin were 20 pg ml- I . Preliminary studies were carried out for the determination of antimony and lead. Antimony was found to react with NaBH4, remaInIng from the previous determinations, giving an analytical signal. A reversed injection manner, i.e., injection of the NaBH4 solution prior to the analyte solution was used to avoid uncertainty caused by residual NaBH4 present and to ensure that an excess of NaB H4 was available. A solution of 0.4% L-cysteine was found to reduce the interference from selected transition metal ions, Co(II), Cu(II), Ni(II) and Pt(IV). Hydrochloric acid - hydrogen peroxide, nitric acid - ammonium persulphate, and potassium dichromate malic acid reaction systems for lead hydride generation were compared. The potassium dichromate - malic acid reaction medium proved to be the best with respect to reproducibility and minimal interference. Cu(II), Ni(II), and Fe(II) caused strong interference In lead determinations, which was not reduced by L-cysteine or Lcystine. Sodium citrate, ascorbic acid, dithizone, thiosemicarbazide and penicillamine reduced interferences to some extent. Further interference reduction studies were carried out uSIng a number of amino acids, glycine, alanine, valine, leucine and histidine, as possible interference reducing agents in the determination of germanium. From glycine, alanine, valine to leucine, the interference reduction effect in germanium determinations decreased. Histidine II was found to be very promising In the reduction of interference. In fact, histidine proved more efficient than L-cystine and L-cysteine In the reduction of interference from Ni(II) in the determination of germanium. Signal enhancement by easily ionized elements (EIEs), usually regarded as an interference effect in analysis by DCP-AES, was studied and successfully applied to advantage in improving the sensitivity and detection limit in the determination of As, Ge, Sn, Sb, and Pb. The effect of alkali and alkaline-earth elements on the determination of the above five hydride forming elements was studied. With the appropriate EIE, a signal enhancement of 40-115% was achieved. Linear calibration and good reproducibility were also obtained in the presence of EIEs. III