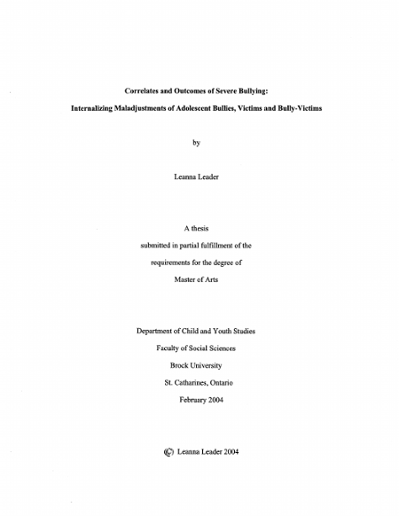 The current study examined the association between involvement in bullying and victimization and internalizing difficulties such as self-esteem, social anxiety, depression and body image. Possible gender differences were also examined. The participants, high school students from Southern Ontario (N=533), were drawn from a larger, data set as part ofa study that was completed by the Youth Lifestyle Choices: Community Research Alliance (YLCCURA). The students completed a self-report questionnaire on a number ofmeasures; including, bullying, victimization, self-esteem, social anxiety, depression and body image. The results of this study suggest that those students who self-identified as victims and bully-victims also report higher levels of anxiety and depression than controls and bullies. Severe victims and bullyvictims had a lower body image than severe bullies and controls, whereas severe bullies seem to have a higher body image score than controls. These results are relevant when considering treatments and interventions for students experiencing adjustment difficulties who may also be at risk for bullying victimization. The results also suggest that particular attention needs to be focused on those adolescents who play multi-roles in bullying situations (i.e., bully-victims), since these students may come to the attention ofthe school system for externalizing behaviours, but may also need assistance for internalizing maladjustments.