George Hostetter fonds RG 705
JavaScript is disabled for your browser. Some features of this site may not work without it. 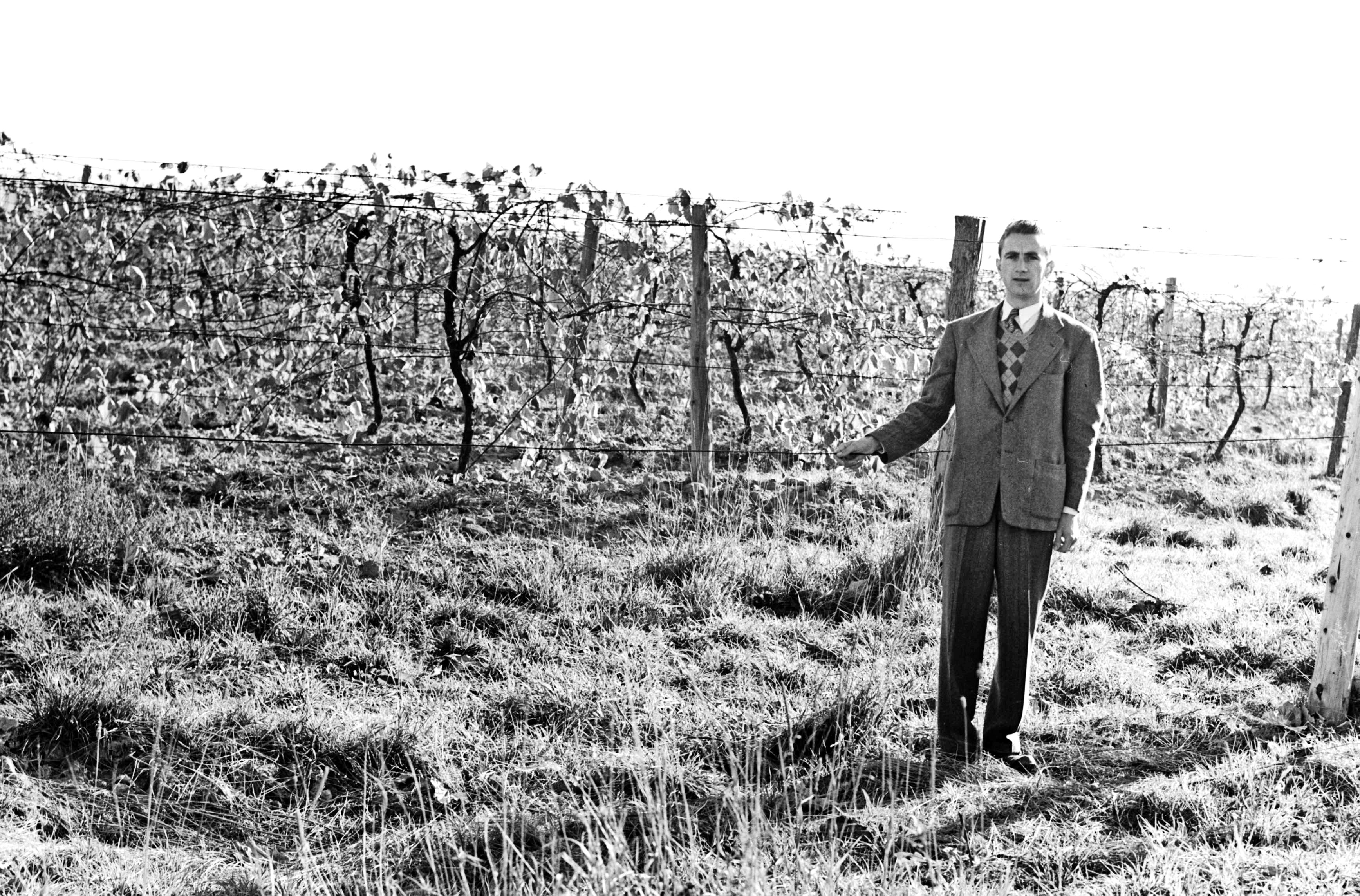 George Hostetter's longstanding relationship with Bright's Wines began in 1936 when he worked for Brights Wines as student until he became a full-time employee in 1940. Hostetter received his formal training at the University of Toronto at Guelph in 1944. He received a B.Sc. in Agriculture. After his graduation George was well positioned to enter full time employment with Brights under the tutelage of chief scientist and director of research, Adhemar de Chaunac. As a fulltime employee he undertook research in vine culture by examining and testing spraying, pruning, fertilizing, and trellising techniques. The bulk of these groundbreaking results of these trials are included in these records.

The Research program which he has developed for Brights Wines Limited has involved the testing of over 600 wine grape varieties plus several hundred seedling varieties. From this program he has selected 40 varieties for Brights Wines which have formed the base for the development of world class wines in Ontario.

During the 1950's he developed new methods of pruning, training and thinning of clusters to ensure high quality grapes and helped to develop more winter hardiness in both the vinifera and vinifera hybrid varieties. As Director of Viticultural Research, developed with his staff, new insect and disease management programs to ensure grape quality and survival of the vines. The information developed through this research has been freely shared with other members of the Ontario wine industry in an effort to upgrade the quality of all Ontario wines.

Early research and development of grape growing techniques included collaboration with many North American and European wine organizations. Bright's Wines maintained strong professional connections to grape growers in the Upper New York region as well as in Europe. As part of this relationship Hostetter became a frequent contributor to articles about the cultivation and testing of grape varieties that would thrive and produce for the North American wine market.

Under Hostetter's guidance Bright's was the first to introduce vinifera grapes to the Canadian market. This introduction was to replace the long-standing Lambrusca grapes that had previously been the dominant source of early wines and grape beverages in Canada. Because of this groundbreaking introduction Bright's became a world-class producer of table wines for the Canadian market. It also encouraged the incredible growth of wine making in the Niagara region and beyond.

Hostetter was a contributor to several professional publications like "Canadian fruitgrower and gardener". He also contributed wine related columns to the Niagara Falls Review under the column "Wine Lines", and to the seniors publication 50 and over in Niagara, under the column "Libations".

George Hostetter was the first Canadian to receive the American Wine Society Award of Merit in 1979 “for his achievements bringing into commercial production vinifera and hybrid varieties in North Eastern America, and his leadership in establishing the first successful vineyard of pure vinifera varieties in the northeast growing area of this continent”.

In 1982 Hostetter was named Chevalier No. 818 I the Confrerie de la Chaine de Rotisseurs by grand chancellor Jean Valby of Burgundy, France.

Hostetter retired from Brights in 1986 after a more than 40-year association. He remained active in the wine industry by creating his own consulting company, VinTech Associates and consulted on the creation of a new winery on the Willowbank estate in Queenston, Ont. and other projects. [source: New Winery on Willowbank estate, Tony Aspler, Toronto Star, 1986]

At a ceremony on 29 April 1987, George William Bligh Hostetter was awarded the Order of Canada. “In low-key fashion, Mr. Hostetter downplayed his individual achievement, saying an award of this kind is ‘the result of working with other people’ “.