George E. Curtis Photographs of Niagara Falls collection, ca1860s-1870s RG 703
JavaScript is disabled for your browser. Some features of this site may not work without it. 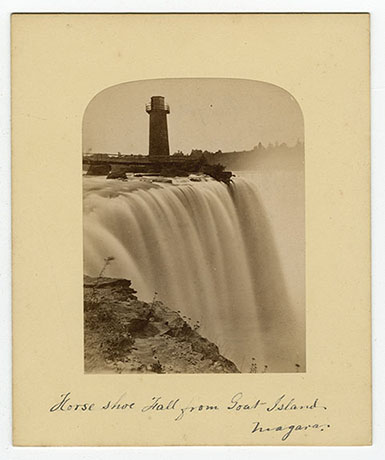 George E. Curtis, born ca. 1841, his birthplace has been given in various sources as Buffalo, NY, Indiana, and Pennsylvania. He died 16 December 1910 in Niagara Falls, NY and was buried in Oakwood Cemetery with his wife Emma Symonds Curtis. In 1864, Curtis enlisted in the United States Navy at Erie, Pennsylvania and served aboard the USS Michigan and USS North Carolina. He was discharged in February of 1865. Active from 1860s-1910, he is well known for his stereoscopic views of the Niagara Falls. Additional photographs located in the collections of the Eastman Museum, Rochester, NY and the New York Public Library: Photography Collection and others.

This collection came from photographer James Cremer of Philadelphia as a sample set of Curtis’s images of the falls stored in a period sample box. The sample box was manufactured by Samuel Peck and Co., a New Haven-based company that manufactured photographic accessories in the 1870s. James Cremer, a stereoscopic photographer himself, is best known for a series of photograph views of the Philadelphia Centennial Exposition and owner of the Stereoscopic Emporium on South 8th Street in Philadelphia, Pa. The collection comes from the estate of his grandson Henry Richardson Cremer, a photographer himself.

Highlights of the collection include the snow and ice encrusted landscape of the Falls and parks, as well as tightrope walker Henry Bellini, and the new suspension bridge. Most of the photographs have been captioned in perhaps Curtis’ own hand.

Copyright is retained by Brock University. Researchers must obtain the written permission of the holder(s) of copyright and the University Archives before publishing from materials in the collection. Most items may be copied in accordance with the library's usual procedures unless otherwise specified.