“You’re on one side or the other. You’re either a Leafs fan or a Sabres fan”. An Interpretive Study of Buffalo Sabres and Toronto Maple Leafs Fans in Fort Erie, Ontario 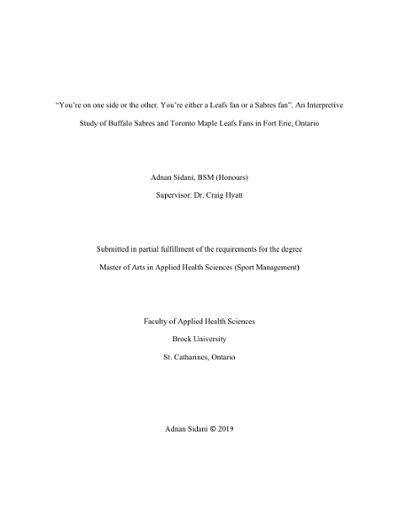 Few sports consumer behavior researchers will contest that it is common for people to become fans of their local, hometown, easily-accessible team (Wann & James, 2019), but what if obvious-sounding concepts like “local”, “hometown”, and “accessible” are in dispute? What team would people cheer for then? Such an interesting case is found in the border town of Fort Erie, Ontario, Canada, that is located directly across the river from Buffalo, New York, USA. National Hockey League (NHL) fans in Fort Erie typically cheer for either the Buffalo Sabres (whose arena is visible from Fort Erie’s shoreline), or the Toronto Maple Leafs, who play in a Canadian city 95 miles (152 km) away. To understand how they became fans and maintain that fandom, nine Sabres fans and nine Leafs fans from Fort Erie were interviewed face-to-face and one-on-one in the interpretive tradition. Fans from both teams painted a picture that in both becoming fans and maintaining fandom, the culture and image associated with not only the teams themselves, but also the city and country they play out of were crucial factors. Leafs fans often referred to hockey’s cultural importance to Canadians, making it almost traitorous to cheer for an American NHL team. Sabres fans often referred to the scrappy, working-class image of Buffalo aligning with the scrappy, working-class image of Fort Erie. Sabres fans would also discuss how accessible the team was, in terms of both proximity and cheaper tickets, allowing them to easily attend games. Leafs fans would also discuss how accessible their team was, but in terms of media access, allowing them to watch almost all Leafs’ games on television. Interestingly, their attitude towards Americans aligned with their team choice. Helleiner (2016) studied Canadians who live across the border from Buffalo, and found four attitudes towards the difference between Canadians and Americans: Pretty much the same as Americans, “Americanized” Canadians, Non-Americans, and Anti-Americans. Sabres fans typically were in the first two categories, and Leafs fans typically were in the latter two. In conclusion, Leafs fans (filled with non-American sentiment) felt that even though Buffalo was right next door, the Leafs would be considered the local, hometown, accessible team as the Sabres played in a foreign country, the Leafs were the closest Canadian NHL team to Fort Erie, and all their games were typically televised in Fort Erie. Sabres fans (more sympathetic to Americans overall) considered them the local, hometown, accessible team as they were right across a bridge, the team and the city aligned with the blue-collar image of Fort Erie, and live attendance was extremely easy. Borderland living is different than living inland (Helleiner, 2016), so it comes as no surprise that borderland sport fandom would be different. Future research should study how fans living in regions like Southwestern Ontario (across from Detroit, Michigan), or Western New York (close to Toronto, Ontario) create and maintain their fandom where terms like “local”, “hometown”, and “accessible” are influenced by perceptions of culture and image moderated by questions of national identity.