Generalized Anxiety Disorder Following Mild Head Injury: An Investigation into the Relationship Between Physiological Underarousal and Symptoms of Anxiety 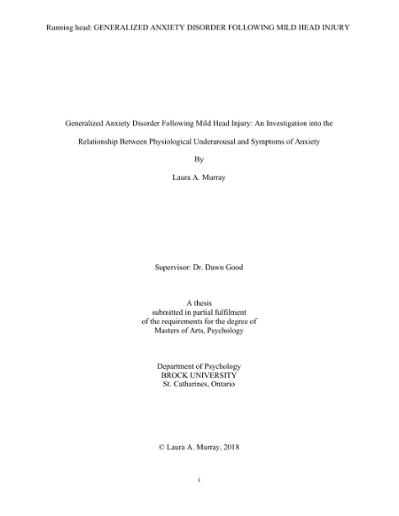 Mild head injury (MHI; concussion) is a major health concern worldwide as thousands of people each year suffer from an impact to the head or body sufficient to cause concussion. Acceleration/deceleration and rotational forces cause axons to stretch and tear, particularly in the area of the ventromedial prefrontal cortices (vmPFC), which in turn can attenuate physiological autonomic arousal and disrupt emotional regulation (Bechara, Damasio, & Damasio, 2000; Fisher, Rushby, McDonald, Parks, & Piguet, 2015; Pardini, Krueger, Raymont, & Grafman, 2010). Diminished levels of visceral feedback leaves one at a disadvantage for predicting, anticipating and reacting to environmental events. Therefore, individuals with MHI are described as experiencing heightened or exaggerated reactions to situations as they are not psychologically, or physiologically, prepared for stressful events. Some of these overreactions may be viewed as aggressive, others may be viewed as symptoms of anxiety; and in fact, many studies indicate these to be common complications following head injury. Diagnoses of Generalized Anxiety Disorder (GAD) are particularly frequent in a head injury population, however its characteristics may not capture the symptoms individuals with MHI experience. Whereas worry or maladaptive anticipation of adverse outcomes are the cardinal features of GAD and, reportedly, serve to control the physiological reactions that accompany uncertainty (Behar, DiMarco, Hekler, Mohlman, & Staples, 2009; Roemer & Borkovec, 1993) an absence of hypervigilance and lessened alertness is more likely in persons with MHI. To examine these variances in symptom characteristics, 84 participants (39% with MHI) completed self-report measures of aggression, dimensions of anxiety (cognitive, affective, somatic), worry, and somatization. Electrodermal activation (EDA) was measured as an indicator of autonomic physiological arousal across 4 phases of a stress manipulation (Initial Baseline, Anticipatory, Scare, Final Baseline). Having a history of MHI was not associated with significant expressive/reactive aggression; those with a GAD diagnoses endorsed the most number of aggressive symptoms. Similarly, individuals with GAD reported the highest levels of anxiety across all anxiety measures and subtypes. However, in line with our predictions, students with MHI reported the highest levels of somatic anxiety symptoms relative to affective and cognitive symptoms, and somatic anxiety was positively correlated with severity of the injury (i.e., the more severe the injury, the higher levels of somatic anxiety reported). Further, as expected, whereas the GAD group reported the highest level of worry-related symptoms, neither a history of MHI, nor injury severity, was correlated with worry. While no significant difference between EDA levels was noted in the baseline or experimental conditions, the pattern of results across the manipulation was as anticipated with the MHI group displaying the lowest level at baseline and anticipation, and the largest reaction to the scare phase. The GAD group did not demonstrate the expected reduction in autonomic responsivity. However, EDA levels for the MHI group alone had a significant negative correlation to the Anticipatory phase and trending towards a significant positive correlation in the Scare phase. Together, these findings indicate a fundamental difference in types of anxiety and vigilance symptoms found in persons with GAD versus MHI. A dampened baseline and anticipatory physiological response can result in a decreased ability to predict outcomes, and exaggerated reactions, especially in times of uncertainty (Bechara et al., 2000; Damasio & Bishop, 1996). Frequent and ongoing behavioural outbursts are observed in persons with TBI (traumatic brain injury), but may reflect autonomic, as opposed to affective, underlying neural mechanisms. Acknowledging and understanding these subtle differences in symptom description can provide insight into more effective treatment paradigms.