Burwell-Clark-Glenny Family Fonds, 1817-1878 RG 668
JavaScript is disabled for your browser. Some features of this site may not work without it. 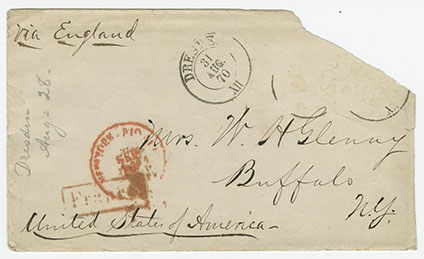 John Whipple Clark (1799-1872) was born in the Village of Newport, Herkimer County, New York. He graduated from Fairfield Medical College in 1822 and moved to Buffalo the following year. In addition to practicing as a doctor, Clark was also a businessman and public servant, serving as a village trustee and alderman. He became partners with Dr. Cyrenius Chapin, but left the practice in order to work in the real estate business full time. He became prosperous but lost his fortune in the Panic of 1837. He never married.

Clark’s sister Ann married Dr. Bryant Burwell (1796-1861) in 1817 and the couple resided in Buffalo, where Burwell formed a partnership with Dr. Cyrenius Chapin after the departure of John Whipple Clark. They had three children, George N. Burwell, Esther A. Burwell Glenny (who married William Henry Glenny, Sr.) and Anna C. Burwell Rathbone. The Burwells also suffered significant financial losses in the Panic of 1837, and Bryant struggled to support his family with his medical practice. After the death of his wife Ann and his financial losses, Bryant became depressed, but improved after marrying Mary Cleary in 1844. He gradually withdrew from his medical practice and brought in his son George, a recent medical school graduate. His depression returned in the 1850s and he died in 1861, after a general decline in health.

Esther Burwell, the daughter of Bryant Burwell and Ann Clark, married William H. Glenny (1818- 1882). Glenny was an immigrant from Ireland who came to Buffalo in 1836. In 1840 he founded a small crockery store, which grew to become a leading importer of fine china, glass and other merchandise. In 1877, Glenny hired renowned architect Richard A. Waite to design a new store on Main Street in Buffalo, which became known as “Glenny Block”. The couple had several children, including Bryant, John, George, and William.