Lachlan McCallum fonds, 1862-1948, n.d. RG 665
JavaScript is disabled for your browser. Some features of this site may not work without it. 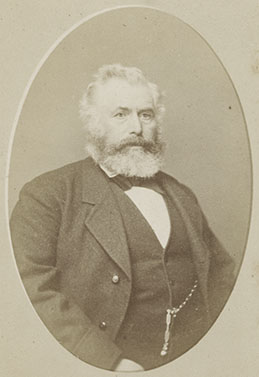 Lachlan McCallum was born in Tiree, Argyleshire, Scotland in 1823. He emigrated to Canada with his family in 1842. McCallum settled in Stromness, in Monck County, Ontario, where he remained for the rest of his life. He began his career as a businessman, but later became involved in politics, serving in the House of Commons and Senate. His early enterprises included building vessels for the Lakes, which he maintained ownership of and used for a freight-carrying business, He also operated flour mills, was involved with lumbering operations, and at one point owned one of the most extensive farms in Ontario. Ina addition to these professional activities, McCallum founded, and was Captain of, the Dunnville Naval Brigade. The Brigade was called into service in June, 1866, when the Fenians invaded at Fort Erie. McCallum's tugboat, the W. T. Robb, transported the men to Port Colborne to pick up troops being assembled to fight the Fenians. They were brought to Fort Erie where an attack had occurred the previous day and took several Fenians prisoner, but found that most of the enemy had moved on. However, another band of 1000 Fenians were approaching Fort Erie at the time, and McCallum and some members of his brigade fought with the Fenians before meeting up with the W. T. Rob, which had embarked with the prisoners and volunteers. For his service, McCallum was presented with a sword by the County of Welland (along with Captain King), and their men were awarded medals.

His first political office was a reeve of the united Townships of Moulton and Sherbrooke. In 1863, he unsuccessfully ran for a seat in the legislative Assembly, narrowly being defeated by David Thompson. He ran again in the first general election after Confederation, and was elected for the Dominion Parliament and the Ontario Legislature as the representative of Monck (which consisted of certain townships from Welland County, Lincoln County, and Haldimand County). After the abolishment of dual representation, McCallum resigned his seat in the Legislature. he ran for a seat in the House of Commons in 1872, was defeated, but won the seat after an election in 1874. He held this position until 1887, when he was appointed to the Senate. During his career, McCallum was a vocal advocate for the enlargement of the canals, the building of an all Canadian railway, and a supporter of the National Policy.

In addition to his business and political activities, McCallum was a member of the Masonic fraternity for nearly forty years. He was initiated into Amity Lodge No. 32, Dunnville, in 1863. In 1864 he filled the Chair of Senior Warden, and in 1866 was installed Worshipful Master. He was exalted to the Degree of the Holy Royal Arch in Mount Moriah Chapter, St. Catharines, and was one of the Charter members of McCallum Chapter No. 29, which opened at Dunnville in 1867.

McCallum married Priscilla Thewlis in 1854. They had eight children. Lachlan McCallum died at his residence in Stromness in 1903, predeceased by his wife and four of his children.