Richard Edward (Ted) Yates fonds, 1914-1955, n.d. RG 649
JavaScript is disabled for your browser. Some features of this site may not work without it. 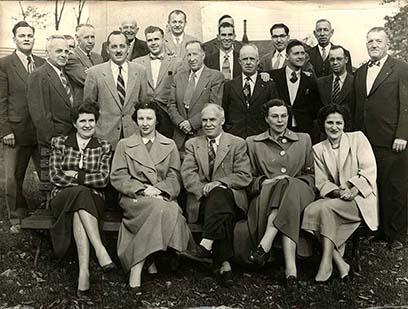 Richard Edward (Ted) Yates (1891-1979) was born in Chorley, Lancashire, England. After emigrating to Canada in 1909, he attended a Canadian army engineering training school in Ottawa. He then worked as a surveyor/instrumentman during construction of the Welland Ship Canal and remained with the canal company until retiring in 1955. For a time, his duties included supervising the ornamental gardens installed at Port Weller upon completion of the canal. Yates' four children include noted Saskatchewan artist and author, Elyse Yates St. George.

The collection includes photographs relating to the construction of the fourth Welland Canal. Also included is a programme that consists of an itinerary for the inspection of the Welland Ship Canal work by His Royal Highness, the Duke of Connaught and Her Royal Highness, the Princess Patricia and staff. Additionally, there are diagrams of the Welland Ship Canal, including general plans for sections 1 through 3.