Women’s Literary Club of St. Catharines Fonds 1892-1996, n.d. (non-inclusive) RG 18
JavaScript is disabled for your browser. Some features of this site may not work without it. 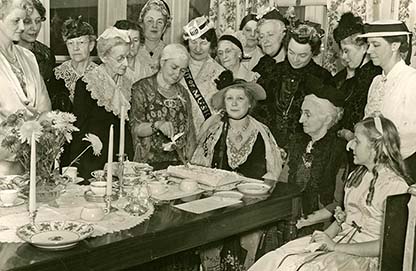 The Women's Literary Club of St. Catharines was founded in 1892 by a local author, Emma Harvey (Mrs. J.G.) Currie (1829-1913) and held its last official meeting on February 19, 1994. After more than one hundred successful years, the last members of the club deposited their archives at Brock University for the benefit of researchers, scholars and the larger community. The object of the club was “the promotion of literary pursuits.” The club was a non-profit social organization composed of women from the St. Catharines and surrounding areas. Club meetings were traditionally held biweekly from March to December each year. The last meeting of the year was a celebration of the club’s anniversary. The early meetings of the club included papers which were presented and music which was performed by Club members. The literary pursuits that would dominate the agendas for the entire life of the Club reflected an interest in selected authors, national and local history, classical history, musical performance and newsworthy events. Within the first year of the club’s existence, detailed minute books became the norm and an annual agenda or programme developed. The WLC collection contains a fairly complete set of meeting minutes from 1892 until 1995 and a comprehensive collection of yearly programs from 1883-1986 which members took great care to publish each year.

Mrs. Currie brought together a group of women with a shared interest in literature and history who wanted to pursue that interest in a formal and structured manner. She was well educated and influenced at an early age by her tutor and mentor William Kirby, local historian, writer and newspaper editor from Niagara-on-the-Lake. While Currie’s private education influenced her love of literature and history, the club movement of the 1890’s offered a more public forum for her to share knowledge with other women. Mrs. Currie was the wife of a St. Catharines lawyer, James G. Currie, who also served as a Member of Parliament for the County of Lincoln. Mrs. W.H. McClive, who was also married to a St. Catharines lawyer, worked closely with Currie and they began research the possibility of forming a literary club in St. Catharines. Currie corresponded with a variety of literary clubs across North America before she and Mrs. McClive decided that they might like to begin their own club. They published A Clarion call for Women of St. Catharines to Form a Literary Club. This was published in The St. Catharines Evening Journal in 1892.

The early years of the WLC set the foundation of how the club meetings and events would unfold for the next 80 plus years. Photos and minutes from the first ten years reveal an excitement and interest in organized club outings. One particular event, an annual pilgrimage to the homestead of Laura Secord, became a yearly celebration for the club. Mrs. Currie’s own personal work on Laura Secord amplified the club’s interest in the ‘heroine of 1812’ and she allocated the profits from her publication on Secord in order to create a commemorative plaque/monument in the name of Laura Secord. The club celebrated this event with a regular pilgrimage to this site. The connection felt by club members and this memorial would continue right up until the club’s last meetings.

Isabel McComb Brighty became a member of the club in 1903. In 1933, she took over as club president, and held that position until her death in 1941. Similar to Mrs. Currie, Brighty was a local historian and published 2 booklets on local history. Her obituary indicates her position in the community as an author and involved community member committed to lifetime memberships in the Imperial Order of Daughters of Empire (I.O.D.E.), the National Organization of Women (N.O.W.) and the United Empire Loyalist Society. She was a teacher of elocution and a devoted researcher of Upper Canadian history. In a club scrapbook dedicated to her, the biographical sketch illustrates the professionalism surrounding Brighty. The focus is on her literary works, her published essay, booklets and poetry. This professional focus and diversity exemplifies the interests of these women, especially in their roles outside of the home.