Alexander Hamilton Fonds, 1809-1842 RG 640
JavaScript is disabled for your browser. Some features of this site may not work without it. 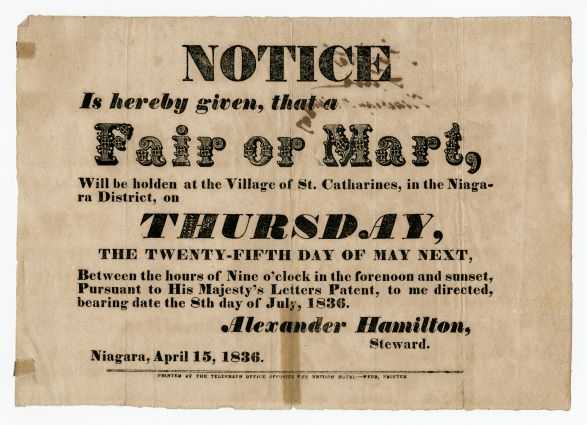 Alexander Hamilton was a businessman, militia officer, office holder, and judge. He was born on July 3rd, 1790 in Queenston, Ontario. He was the son of Robert Hamilton and Catherine Robertson, née Askin.

He attended school at Queenston and Niagara and went to Scotland in 1795 for further education. He worked at his father’s business for a short time after returning from Scotland, but the business failed.

Hamilton was involved in the War of 1812, particularly with small raiding and reconnoitering parties. He became a captain under Major Thomas Merritt in the Niagara Light Dragoons on 1 May 1812 and later served under William Hamilton Merritt.

After the War of 1812, Hamilton applied for posts in the Niagara District as they became vacant. He married Hannah Owen Jarvis in 1816 and they had 8 daughters and 3 sons. In 1817, he received his first commission as a Justice of the Peace. He held posts between 1821 and 1839 as postmaster and deputy collector of customs at Queenston. He was also a surrogate court judge, and Sheriff of the Niagara District. By 1833, he had recouped some of his fortune which allowed him to begin construction at Queenston of a mansion, Willowbank, which still stands. He died on February 19, 1839 in Queenston, Upper Canada.

William Robertson was a Scottish-born businessman and political figure in Upper Canada. He was a merchant in the fur trade. Mr. Robertson was appointed to the district court and land board of the Hesse District of Upper Canada. He had close business ties with the Hamilton Family. Robert Hamilton had married his brother’s widow, Catherine Askin in 1785.

Robert Gillespie was a merchant and businessman who was born in 1785 in Scotland. In 1800, he joined with his brother George in Montreal. At the height of his career, he became a partner in the firm of Gillespie, Moffatt and Co. He eventually moved to England where he died in 1863.

Forsyth, Richardson and Company operated out of Montreal. They were traders who also dealt in real estate.