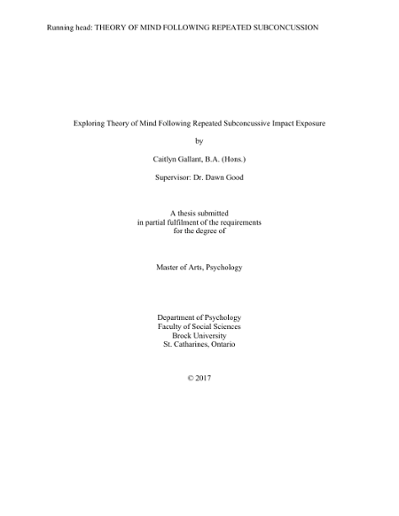 A link between repeated subconcussive impact exposure (SIE) and long-term impairments has been established, initiating research on these repetitive impacts in athletics. This literature has revealed that accumulated asymptomatic injury is associated with cognitive, behavioural, and emotional challenges, as well as severe neurodegeneration, such as Chronic Traumatic Encephalopathy (CTE; Stern et al., 2011). Moreover, after mild head injuries (MHI), individuals are often characterized as self-centered, inappropriate, and insensitive, demonstrating profound social challenges and an inability to adopt others’ mental states or a lack of what is known as theory of mind (ToM; Baron-Cohen, Leslie, & Frith, 1985; Bellerose, Bernier, Beaudoin, Gravel, & Beauchamp, 2015). Despite this, the socioemotional outcomes following repeated SIE remain poorly understood. ToM can be differentiated into its affective and cognitive components which are thought to be subserved by distinct neural regions. In particular, affective ToM has been linked to activity in the ventromedial prefrontal cortex (vmPFC; Leopold et al., 2012) – an area that is highly afflicted by subconcussive impacts (Bigler & Orrison, 2001). Damage to the vmPFC is associated with decreased physiological arousal and impaired social decision-making in MHI participants but it is unclear if SIE produces a similar profile (vanNoordt & Good, 2011). The aim of the current study was to investigate ToM after repetitive SIE, using a SIE composite derived from self-reported athletic history. Participants with varying levels of SIE were compared across a number of ToM assessments (capturing both affective and cognitive ToM), physiological measures, and neuropsychological tests. Although greater SIE was not associated with deficits in ToM performance, it was found to be predictive of physiological underarousal. Likewise, MHI status and severity were associated with reduced arousal reflecting a lack of somatic cues that indicate that a response is socially unacceptable and, in turn, impairing affective ToM reasoning. Interestingly, traditional ToM measures, such as the Interpersonal Reactivity Index (IRI; Davis, 1980) and the Reading the Mind in the Eyes Test (RMET; Baron-Cohen, Jolliffe, Mortimore, & Robertson, 1997), were found to lack specificity when examining ToM deficits in a competent university population. These findings imply that previous research demonstrating ToM impairments after moderate-severe traumatic brain injury (TBI; see Martin-Rodríguez & León-Carrión, 2010 for a review) may be capturing deficits in other domains and should be interpreted with caution. Taken together, the results from this research indicate that the investigation of physiological mechanisms may contribute to understanding of the neurodegenerative process following accumulated trauma in sports and help identify those at risk of social challenges.