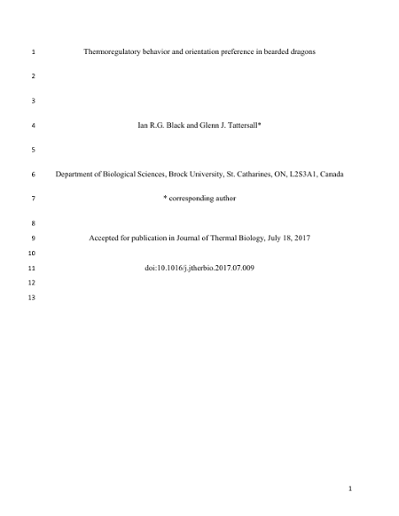 Animals commit time and energy to achieve and maintain thermally optimality, defined as the range of temperatures which maintains physiological processes operating at, or near, maximum conditions (Dewitt, 1967; Huey and Slatkin, 1976). For ectotherms which depend on environmental heat absorption, behaviors that adjust the rate of body temperature (Tb) change are crucial to thermoregulation (Cowles and Bogert, 1944). Although thermoregulatory behaviors are known to present during early life (Blumberg et al., 2002; Lang, 1981; Stahlschmidt et al., 2015; Vollset et al., 2013; Zhao et al., 2013), how thermoregulatory behaviors change through ontogeny is not well stu- died. Shuttling and basking behaviors, which have a high impact on body temperature, are likely present from an animal's first exposure to a novel thermal environment, although these behaviors are also subject to change with experience. For example, shuttling behaviors show lower precision in bearded dragons that are naïve to an operant con- ditioning thermoregulatory paradigm compared to those with prior experience or when the locomotory costs of thermoregulation are in- creased (Cadena and Tattersall, 2009). Indeed, that lizards dedicate time to exploring and adjusting to a thermal gradient in the lab suggests that learning plays a role in behavioral thermoregulation, especially in novel environments (Cadena and Tattersall, 2009). Subtle thermo- regulatory responses might, therefore, also require time and may even need to be learned well after hatching. Unlike birds and mammals, squamates do not typically display parental care behaviors after their young hatch (Reynolds et al., 2002). After hatching, neonates meet their needs on their own, but not all behaviors are present during every phase of an animal's life (Dawkins, 1995; Khan et al., 2010). Innate behaviors are responses that prepare an animal for adaptive reactions to the world around them, and are gen- erally fully formed from the outset without the need for experience or learning; this is also referred to as inbuilt adaptiveness (Dawkins, 1995). Learned behaviors are responses that develop through the ac- cumulation of experience and the retention of information (Barnard, 2003). For the purposes of this work, innate thermoregulatory beha- viors are those present from the neonatal stage that do not generally require experience. Examples of both innate and learned responses can be found in voluntary, involuntary, and autonomic behaviors (Dawkins, 1995), and thus thermoregulatory behaviors can be expected to reflect both innate and learned responses. Aside from morphological and developmental differences, neonatal bearded dragons differ from their adult counterparts, especially with respect to social behaviors (Khan et al., 2010). Neonates are more prone The regulation of body temperature is a critical function for animals. Although reliant on ambient temperature as a heat source, reptiles, and especially lizards, make use of multiple voluntary and involuntary behaviors to thermoregulate, including postural changes in body orientation, either toward or away from solar sources of heat. This thermal orientation may also result from a thermoregulatory drive to maintain precise control over cranial temperatures or a rostrally-driven sensory bias. The purpose of this work was to examine thermal or- ientation behavior in adult and neonatal bearded dragons (Pogona vitticeps), to ascertain its prevalence across different life stages within a laboratory situation and its interaction with behavioral thermoregulation. Both adult and neonatal bearded dragons were placed in a thermal gradient and allowed to voluntarily select tem- peratures for up to 8 h to observe the presence and development of a thermoregulatory orientation preference. Both adult and neonatal dragons displayed a non-random orientation, preferring to face toward a heat source while achieving mean thermal preferences of ~ 33–34 °C. Specifically, adult dragons were more likely to face a heat source when at cooler ambient temperatures and less likely at warmer temperatures, suggesting that or- ientation behavior counter-balances local selected temperatures but contributes to their thermoregulatory re- sponse. Neonates were also more likely to select cooler temperatures when facing a heat source, but required more experience before this orientation behavior emerged. Combined, these results demonstrate the importance of orientation to behavioral thermoregulation in multiple life stages of bearded dragons.
ae974a485f413a2113503eed53cd6c53
10.​1016/​j.​jtherbio.​2017.​07.​009