Field Family fonds RG 581
JavaScript is disabled for your browser. Some features of this site may not work without it. 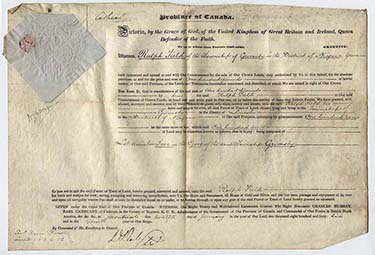 The Field family came to the Niagara Peninsula from the Susquehanna Valley, Pennsylvania around 1784. George Field (1721-1787) and his wife Rebecca Johnson Haines (1724-1798) were United Empire Loyalists. George and three of his children, Daniel, Gilbert, and Nathan, were all members of Butler’s Rangers, a Loyalist military unit founded by John Butler during the American Revolutionary War. They were awarded land by the Crown for their loyalty. George’s son Gilbert (1765-1814) built a home around 1800 along the Niagara River between Queenston and Niagara-on-the-Lake on land that was granted by the Crown. The house was used as a barracks during the War of 1812. Although damaged in the War, the house was not destroyed. A nearby cemetery contains the graves of many members of the Field family, as well as other Loyalist neighbours such as the Browns and Vroomans. The house remained in the family until 1925. The property was acquired by the Ontario Heritage Foundation in 1968. In 1980 it was returned to private ownership but remains under a protective covenant. Charles Field(s) was an innkeeper in Newark (Niagara-on-the-Lake). By 1799 he had taken over operations of the Sign of the Lyon on Prideaux, and also ran an inn on his own property at the corner of Queen and Gate Streets. The connection between Charles Field(s) and the Field family is unclear.