Dorothy Rungeling fonds RG 517
JavaScript is disabled for your browser. Some features of this site may not work without it. 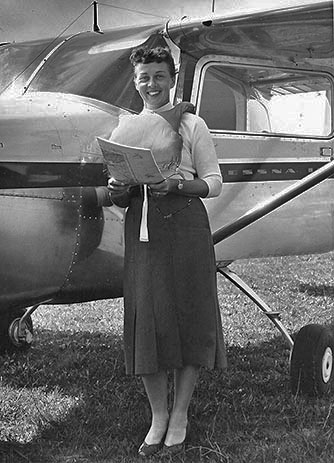 Dorothy Rungeling was born in 1911 and raised in Fenwick, Ontario, by her adopted mother, Ethelwyn Wetherald. After graduating high school, she attended Fort Erie business College. She worked briefly in Toronto and then Hamilton, but eventually took a job with Brown Brothers’ Nursery in Pelham to be closer to home. Dorothy pursued many interests, learning to play the violin, saxophone and clarinet. She met her husband Charles at a local dance where she was playing. In 1939, they opened an automobile and farm machinery business in Welland. In their spare time, they were active in skeet and trap shooting, for which Dorothy won many trophies. In the early 1940s, Dorothy developed a passion for horses, training and showing them in addition to teaching riding at the Welland Riding Club, as well as judging at horse shows. By the late 1940s her interest in horses was waning, but she soon after discovered and pursued a new interest: flying. She joined the Welland Flying Club, obtained a flying licence, and in 1949 purchased her first plane. She proceeded to obtain a Commercial Pilot Licence in 1951, an Instructor’s Licence in 1953, and a Senior Commercial Licence in 1954. She participated in many air races in the 1950s, including the All Women’s International Air Races, the Women’s Transcontinental Air Races, and the Canadian Governor-General’s Cup Air Race. Some of the most notable races were the 1954 International Air Race, where Dorothy met with President Batista of Cuba, and the Governor-General’s Cup Air Race, where she won 1st place in 1953 and 1956 (and was the only woman competing). In 1958, she was also the first Canadian woman to solo pilot a helicopter. That same year she obtained her Airline Transport Licence. She also wrote several articles on aviation, contributing to publications such as Canadian Aviation and Air Facts, a U.S. aviation magazine. In addition to these articles, Dorothy authored several books about her life, as well as a selection of poems and articles by Ethelwyn Wetherald. As planes became more expensive, Dorothy spent less time flying, instead pursuing an interest in sailing. She and her husband bought a sailboat and became members of the Niagara on-the-Lake Sailing Club. In 2003, Dorothy was awarded the Order of Canada for her accomplishments. She also wrote a regular column for the Voice of Pelham in 2012-2013, called A Century in Pelham. Dorothy celebrated her 100th birthday in 2011, and remains an active member of the community.